Virat Kohli vs Chris Gayle: Who is the Real T20 Boss. 22 T20 hundreds against an international average of 50.8, the fastest century in the format’s history against the best chaser in T20I cricket history – these are the kind of numbers that make a statistical comparison between Chris Gayle and Virat Kohli in T20 cricket so fascinating.

We dive into some such interesting parameters and compare the two greats on these metrics. 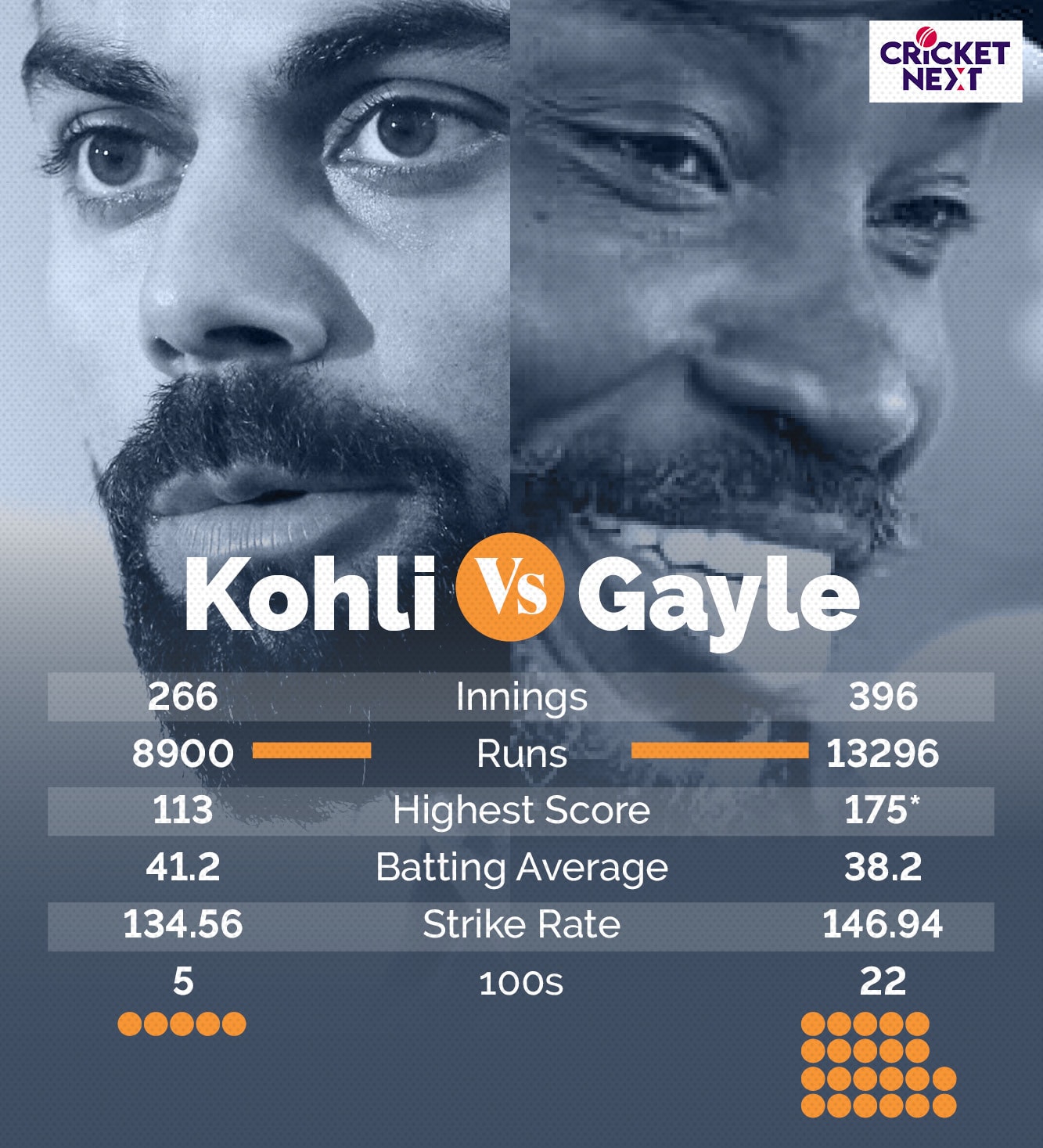 GAYLE HAS THE BIG HUNDREDS BUT KOHLI THE HIGHER AVERAGE

No one has scored more runs than Gayle in T20 cricket history! He has been the poster boy of the format having represented more than 20 teams/clubs around the world. Gayle’s ability to score the big runs places him in a category of his own in T20 cricket. He has smashed 22 hundreds – the most by any batsman in the format. In fact, he has scored 14 more hundreds than the next best on this list!

Kohli has played 130 less innings but boasts of a marginally better average courtesy his exploits for India. In fact, he has the third-highest average in T20 cricket (min. 1500 runs).

A significant difference between the two batsmen is in the strike rate with Gayle scoring 12 runs per 100 balls more than Kohli. The man from the Caribbean boasts of the highest ever individual score in T20 cricket history – an unbeaten 175 off just 66 deliveries (for RCB against Pune Warriors in Bengaluru in IPL 2013) – it is also the fastest hundred in T20 cricket history (off 30 balls).

However, this is the overall picture. Their numbers for country and franchise throw in some contrasting observations. 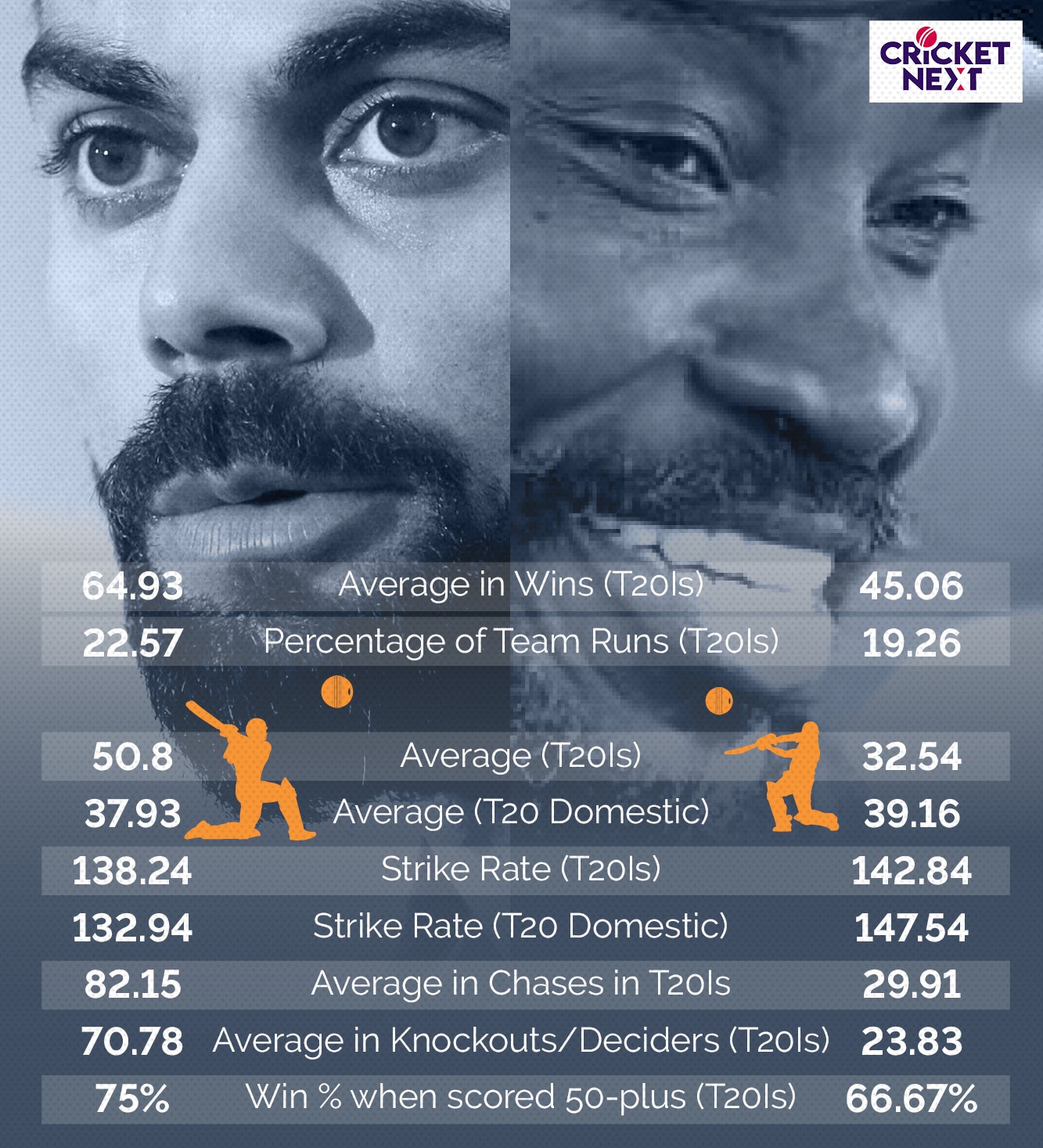 Kohli is the greatest T20I batsman in the history of the format. His average of 50.8 is second to none. His strike rate also increases when he plays for India. Another measure of his outstanding achievements for India is his average in victorious matches (min. 500 runs) – at 64.93, again the best ever for any batsman in T20I cricket.

Gayle, in comparison has a better record when he plays franchise cricket. Both, his average and strike rate are higher in domestic cricket than when he represents the West Indies.

Kohli has also been a phenomenal chaser for India. His average batting second (min. 500 runs) is, by a huge margin, the best for any batsman in T20I history. Comparatively, Gayle has a more modest record chasing for the West Indies.

Kohli has also been a sensational big-match player – he has raised his game in the matches which matter most – series-deciders and tournament knockouts. His unbeaten 72 off just 44 deliveries against South Africa in the semi-final of the WT20, 2014 in Dhaka was one such example.

Gayle, on the other hand, has a poor record in tournament knockouts for the West Indies.

Overall, even in the premier flagship tournament of the format – the WT20, Kohli’s average of 86.33 is more than double of Gayle’s. In fact it is the best average for any batsman (min. 300 runs) in WT20 history – showcasing Kohli’s remarkable ability to rise to the occasion. 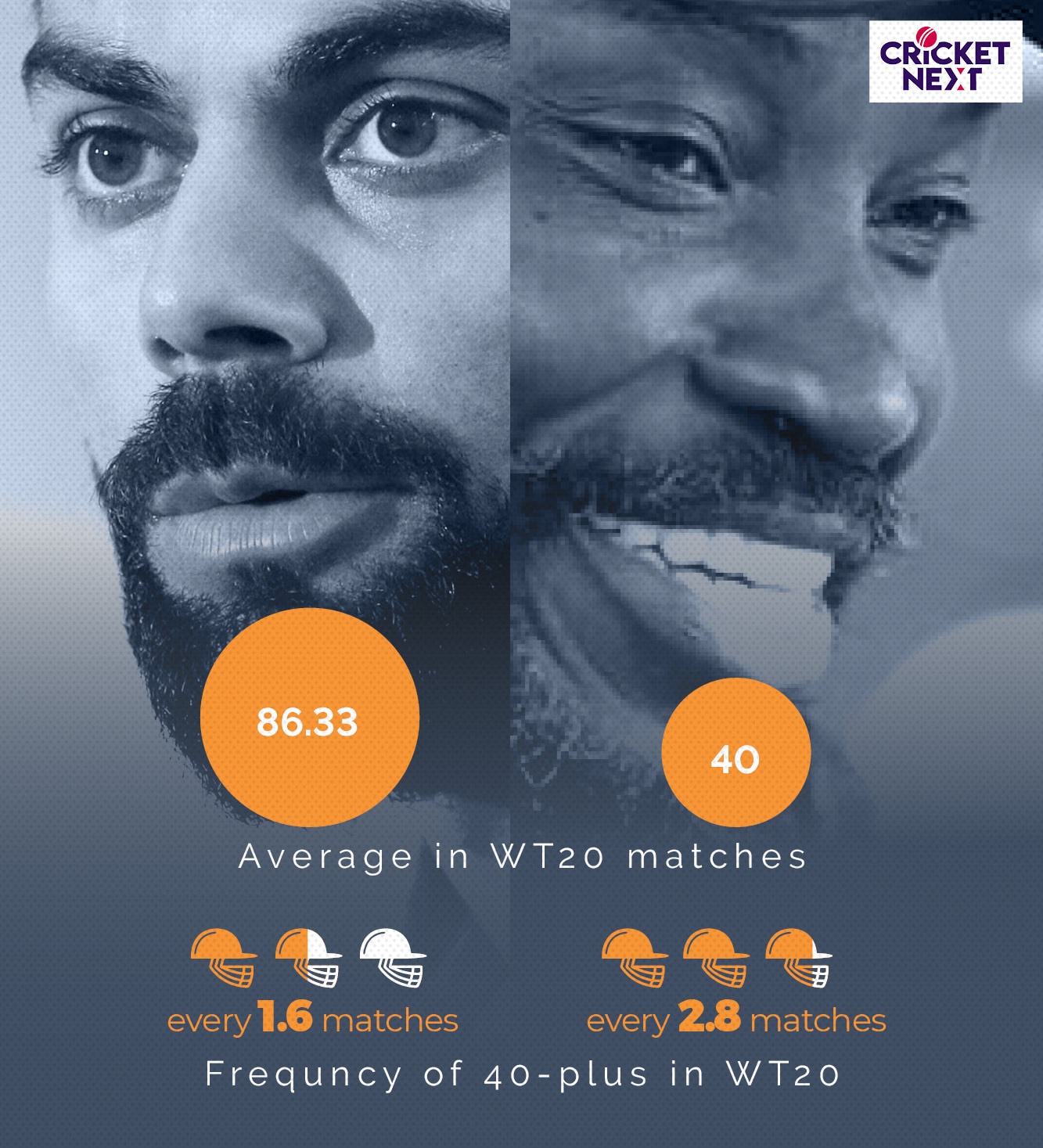 GAYLE – THE BETTER BATSMAN FOR RCB

Gayle had a higher average, a stunning strike rate and RCB won 75% of the matches when he struck a fifty-plus score in the IPL.

His numbers for West Indies pale in comparison.

It was exactly the opposite for Kohli. He has a lower average, strike rate and fifty-plus win percentage when he represents RCB.

There are two reasons for this – one, playing for India, undoubtedly got the best out of Kohli – it spurred him on, it motivated him. The other reason was the different roles he played for India and RCB. For India, he was the aggressor and the mainstay (especially before the rise of Rohit Sharma and emergence of KL Rahul). He took the attack to the opposition bowlers.

His approach for RCB was different. He mostly played the role of an anchor and accumulator letting the likes of Gayle and AB de Villiers provide the impetus. 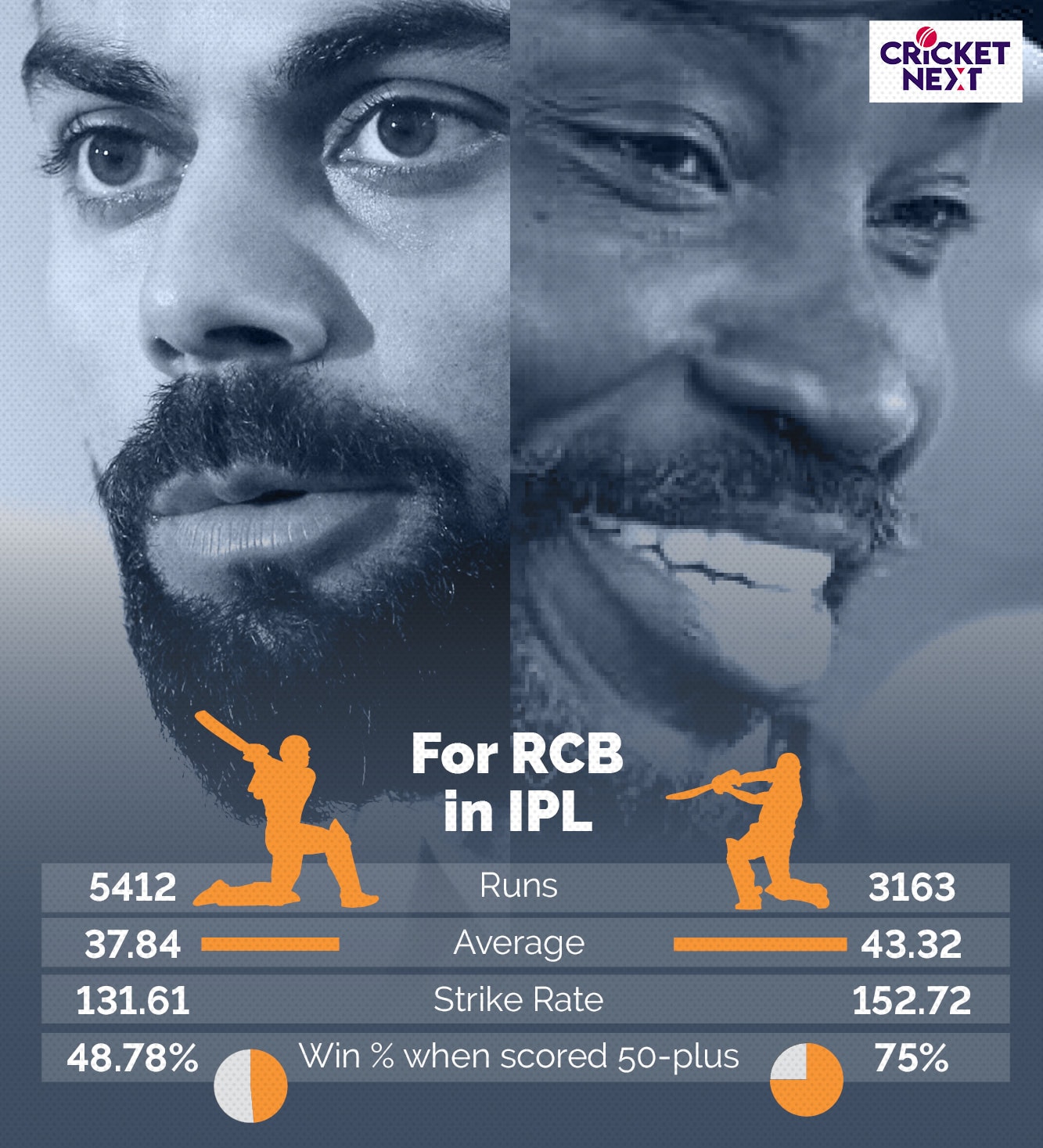 To conclude, it would be fair to say that Kohli is the greatest T20 batsman in international cricket and Gayle the best ever in franchise cricket.

Both, King Kohli and the Universal Boss, have dominated the format.

Coronavirus: What sporting events are affected by the pandemic?

Even as COVID-19 spreads, some sports stadium construction is ‘essential’ and the work goes: